The Knife are a Swedish electronic music duo from Gothenburg formed in 1999. The group consisted of siblings Karin and Olof Dreijer, who together also run their own record company, Rabid Records.

From Stockholm, Sweden, siblings Karin and Olof Dreijer formed The Knife in 1999 and worked on music in their home studio, releasing their self-titled debut album on their own Rabid Records label in 2001. In 2003 The Knife were nominated for Best Pop Group of the Year and Best Pop Album at the GRAMMYs for their second album, 'Deep Cuts.' However, the Dreijers boycotted the ceremony, sending two people in gorilla costumes to protest the dominance of male acts in the music industry.

Early in 2005, The Knife performed their first ever live show at London’s ICA and played in front of a video by artist Andreas Nilsson. The Knife and Nilsson teamed up again on the video for the title track of the group's third album, 'Silent Shout,' which was released in early 2006 in Sweden and later that summer in the U.S. (via Mute) and U.K. (via Brille). The duo played a handful of European, Scandinavian and North American dates in 2006, accompanied by more of Nilsson's visuals.

Following the completion of the Shaking The Habitual tour, the band announced their indefinite hiatus. In 2017 they released 'Shaking the Habitual: Live at Terminal 5' in Europe and Scandinavia. A full length film of the concert was also shared on YouTube. 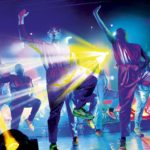